OK. I promised you a giveaway last week. And today I’m super excited to deliver on that promise!

To thank you—my awesome pebble throwing readers—for following me, reading my random musings, and joining the conversation each week, I’m giving you a chance to win this soon-to-be-released Bible by Thomas Nelson.

And guess what? You’ll be among the first to own it because it’s not even hitting bookstores until June 7th! I think you’re going to love it! 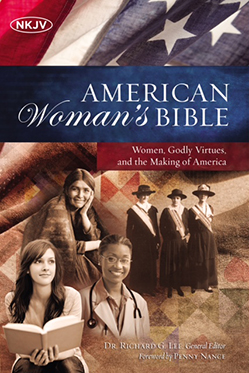 The American Woman’s Bible highlights extraordinary actions and words from influential women in our country who live out biblical virtues.

It features women like abolitionist, Angelina Grimke, who spoke out publically against slavery in the 1830’s, bravely issuing challenges to women such as:

“I know you do not make the laws, but you are the wives, mothers, sisters, daughters, and grandmothers of those who do. If you really suppose there is nothing you can do to overthrow slavery, you are greatly mistaken.”

Tucked inside this Bible you will find profiles of Christian women, some who are well-known historical figures such as Rosa Parks and others like Lisa Beamer, whose heroism continues today. (Lisa’s husband, Todd, lost his life derailing a terrorist plot to crash a plane filled with Americans in the succession of September 11th terrorist attacks.)

I believe you’ll enjoy the wide array of America’s outstanding women represented in this Bible and find yourself encouraged to make a difference in society and leave your ripple effect on future generations.

Features of this Bible include:

To enter my giveaway for this awesome Bible, simply leave a comment below.

(click to tweet)
I will draw a winner on Tuesday, June 7th. Thanks for stopping by and may the best woman win 🙂

13 thoughts on “Want to win this? Enter my Giveaway!”

Hello! Here's a little more about me. I'm on Facebook and Twitter @MaresaDePuy. Thanks for checking out my blog!